Fjord Line’s brand new high-speed catamaran ferry, Fjord FSTR, has been launched from Austal Limited’s shipyard on the Philippines. The ship will replace HSC Fjord Cat for the route between Kristiansand and Hirtshals, and will double the capacity of the fastest route between Norway and Denmark. 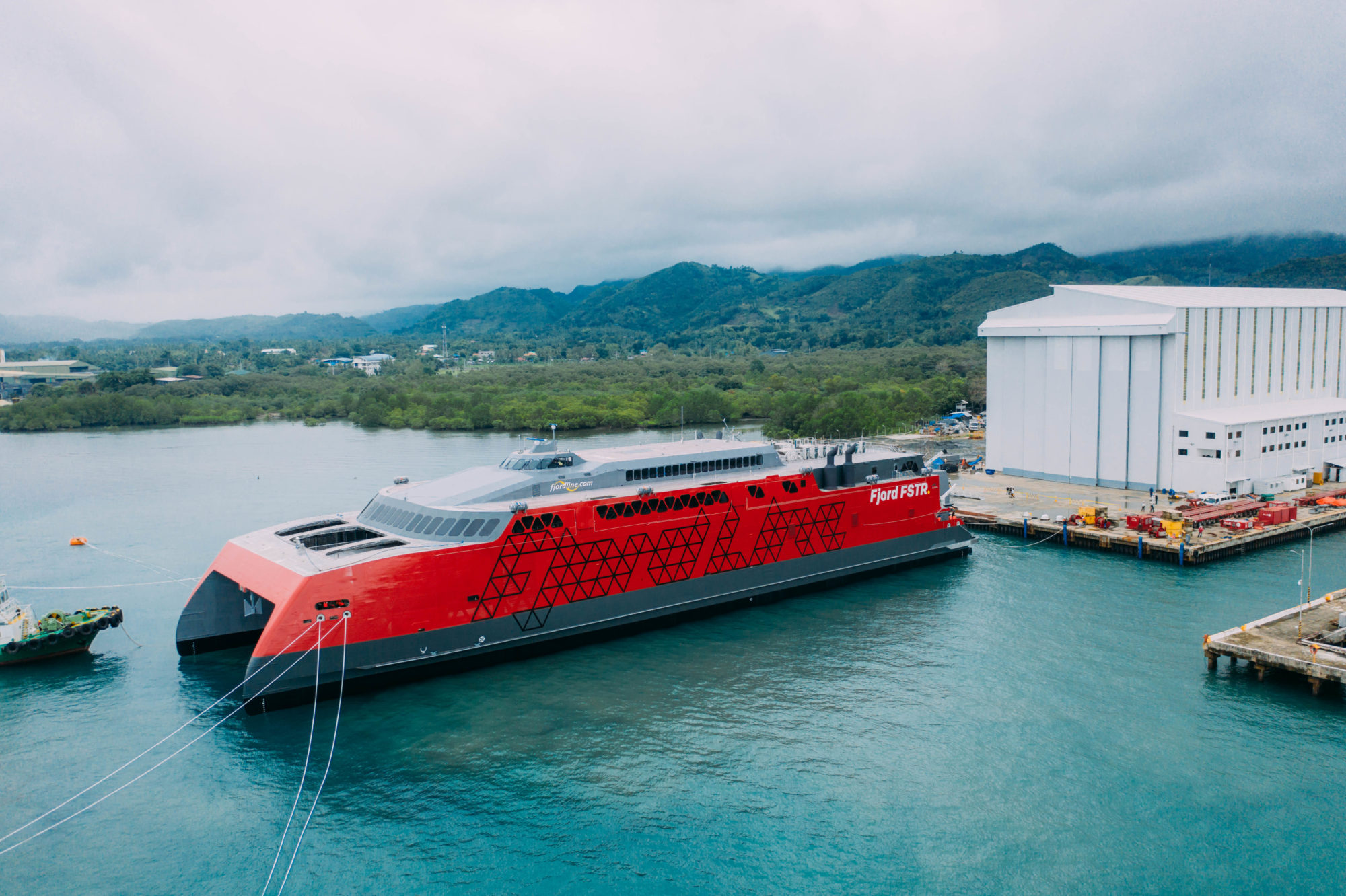 Friday February 7, it was finally time for the grand test in water and the launch is described as a success by David Singleton, CEO in Austal Limited.

– The ship we have built for Fjord Line is impressive, and it is the first of several large high-speed ships that will be built on Austal’s shipyard on the Philippines, he says.

The Australian shipyard was commissioned to build the ship the summer of 2017. The construction started in the spring of 2018, and Fjord FSTR is now in the final phase before its delivery to Fjord Line.

– We are very excited to welcome the ship and are thrilled to see how the catamaran will be received by our customers, says Rickard Ternblom, CEO in Fjord Line.

Still the fastest route to Denmark

The new catamaran will have the same crossing time as Fjord Cat does today, that being 2 hours and 15 minutes. But the substantial improvements that have been done on Fjord FSTR will be noticed by the audience.

– Passengers can choose between three different restaurants on board, we have a children’s area and the tax-free shop is almost twice as large as the one we have on Fjord Cat, Ternblom says.

One of the restaurants is a lounge, which the passengers pay a little extra to sit in. Refreshments and a permanent seat will then be included. The guests will also find a café and a bistro on board.

Fjord FSTR can fit twice as many passengers as Fjord Cat with a capacity of 1200 people and has two car decks that can hold a total of 404 cars. The catamaran is also equipped with 16 charging stations and is the first Norwegian passenger ferry to offer this.

– The ship is built with several innovative features improving both sailing abilities and guest comfort onboard with the help of a ride control system. The catamaran is also equipped with a new and optimized hull shape, minimizing fuel consumption and waves when sailing over Skagerrak between Norway and Denmark, Ternblom says.

When the season kicks off in Kristiansand on April 3 this year, it will be Fjord Cat that makes sure that Fjord Line’s passengers get back and forth between Norway and Denmark. Fjord FSTR will take over later in the season.

Technical information about the ship:

Fjord Line was founded in 1993. With a 21% market share we are Norway’s second largest shipping company in international passengers’ traffic and freight transportation between Norway, Sweden and Denmark. The company’s four ship operating five routes, employing around 700 and transports more than 1,4 million passenger annually. In addition to passenger traffic, we also transport commercial vehicles and goods.

Austal is Australia’s global shipbuilder designing, constructing and sustaining some of the world’s most advanced commercial and defence vessels. For more than 30 years Austal has contracted more than 300 vessels for 54 countries worldwide. Austal is Australia’s largest exporter of defence ships and is the first ASX-listed shipbuilder. Austal has industry-leading shipyards in Australia, the United States of America, Philippines and Vietnam with service centres worldwide, including the Middle East.